Carey vs. South Side Boys Analysis 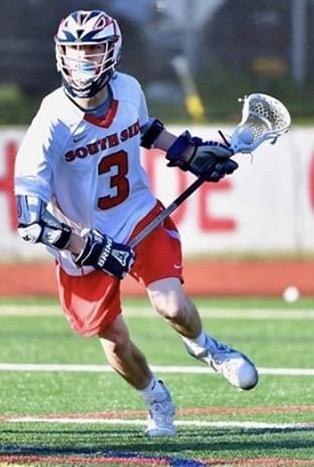 On South Side’s senior day, they were faced with a tough task ahead of them by going up against a young and exciting Carey team. Both of these teams cores are filled with good Sophomores and Juniors, and being that these teams are in the same conference, it was a showcase of the young talent that Nassau County Conference B-1  has to offer.

In the first quarter, South Side started out their Senior day the right way, as Senior Midfielder, Liam Kassl wanted to make his last regular season home game a special one by scoring the first goal. Carey answered back with 2 goals by Conor Murray and Michael Faraone. South Side returned the favor 2 unanswered goals by Brian Albertsen and TJ Sheehan, who scored who off a beautiful assist from Nick LiCalzi making it 3-2 South Side at the half.

The first half wasn’t the most sound lacrosse as both teams turned the ball over a bunch of times, and it looked like the team who made fewer mistakes would win the game. Carey goalie, Robert Flohr kept Carey in the game in the first half as he made save after save.

Like the first half, South Side came out strong in the second. Griffin O’Shea would go low and away to make it 4-2, and then TJ Sheehan would come around the X for a layup goal to make it 5-2,  and then Brian Albertsen would score again to make it 6-2. With the game looking like it was getting out of reach for the Carey Seahawks, they didn’t give up. Jim O’Connell would give Carey their 3rd goal of the game with 4:02 left in the third, and less then a minute later,  Joe Todaro caused a pivotal turnover, and Patrick McGrath capitalized off of it with with a crucial ground ball, started a fast break and found his buddy, Conor Murray to cut South Side’s lead to 2. After Joe Todaro’s big strip and Patrick McGrath key ground ball, Carey had momentum on their side, but South Side would answer back with 2 unanswered goals to give them a four goal lead, and eventual 8-4 victory.

South Side had a great regular season, as they beat all the teams they were supposed to beat, and outside of the Manhasset and Garden City games, they were in every single game. South Side isn’t the most flashy team compared to the powerhouses in Nassau County, but they get the job done and they are very underrated.  South Side also has momentum on their side as they have bounced back very well from a 13-3 loss to Manhasset by winning four straight games. The big question for South Side is if they can shock the world and beat either Manhasset or Garden City to get to the Nassau County finals. Even if the playoffs don’t pan out the way the Cyclones want it to, it’s not the end of the world because most of their core is coming back next season. They have their two Junior FOGO’s coming back in Aidan Kelly, and Rich Petrone. They have a strong middie coming back in Junior,  Ezavier Brewster. They have two of their top goal scorers coming back in Junior, William Pickett, and Sophomore, TJ Sheehan. Also, they have their star player coming back in Nick LiCalzi, who was all over the field today, and really impressed me with his great stick skills and his ability to pick up ground balls. South Side will be a tough team to knock out of the playoffs this May.

Carey’s 5-10 record does not reflective their team at all. Carey is a very young team, as most of their starters are Sophomores. In this game, Carey had too many turnovers, but that’s part of the growing pains and the process of getting better. Carey played a very tough schedule this year, and I tip my cap off to Head Coach, Tom Aiello for scheduling some tough non-league games like Syosset, Farmingdale, and Massapequa because that’s how you get better by playing the top dogs in Nassau County. Jojo Todaro was one of the best players on the field today as he did it all for the Seahawks. He scooped up ground ball, he caused turnovers, and he was effective in the clear game. Todaro, along with Michael Farraone, and Jim O’Connell will make Carey a team to watch out for in 2020.