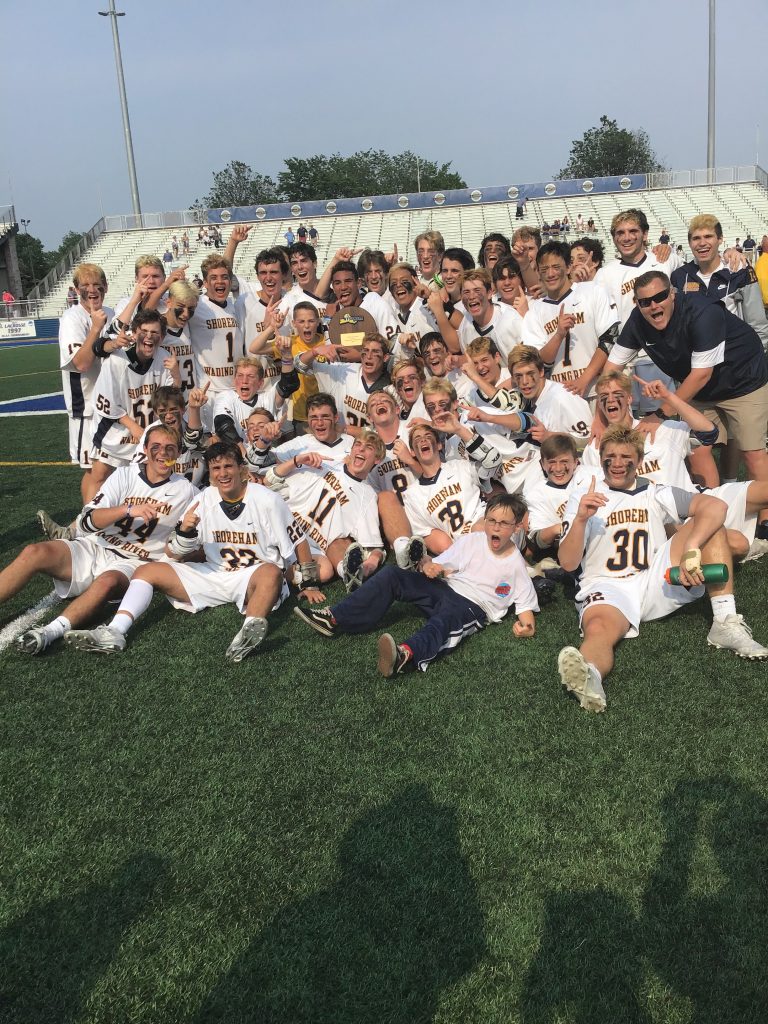 This game was an absolute thriller. The Cold Spring Harbor Seahawks jumped out to an 8-4 lead at halftime, and were up 11-6 with 3:09 left in the third. Shoreham-Wading River would not let their season end this way after a huge upset victory against Mount Sinai. This is where the fun began.

The Wildcats when on a 7-0 run, started by Alec Gregorek to make it 7-11 with 2:43 left in the third. Gavin Gregorek went absolutely off by scoring three goals in a row to make it 10-11 with 6:09 left in the game. Jack Erb would then tie the game at 11 with 5:09 left, followed by Tyler Schwarz to give Shoreham a 12-11 lead with 4:48 left. Game MVP, Gavin Gregorek scored his fourth and final goal in the game, all of them which were in the second half to make it 13-11 with 2:53 left. Alex Moynihan put Cold Spring Harbor within one with 2:40 left. After a Shoreham turnover, Cold Spring Harbor got the ball back with 5.6 seconds left, but the Wildcats made one last stop to win their seventh Long Island Championship, and their second in four years.

Shoreham-Wading River has been the most exciting team in the 2019 playoffs. When this team faces adversity, they respond as they had two thrilling playoff victories to call themselves champions. This team has a great attitude and drive which is set forth by the coaching staff, and these kids know how to win big games. Gavin Gregorek was named the MVP of the game, and he was more than deserving. During the 7-0 run, Xavier Arline was held off the goal column as the Seahawks defense was face guarding him, and that created opportunities for Gregorek to shine. Dominic Visintin also shined during this game by scoring 2 goals and dishing out 3 assists. Trevor Kessel was coming off of a strong game against Mount Sinai where he shut down Joey Spallina to two points, and he had a pivotal ground ball late in this game. Tyler Schwarz also had a strong game by having a goal and an assist. Shoreham’s next test is Rye, as they look to continue their red hot postseason run.

This is a tough loss for the Seahawks as they tired to avenge their loss last year in the Long Island Championship against Islip. Peter Licciardi and Danny Striano went off in this game as Liccardi had 4 goals and 2 assists, and Danny Striano had 3 goals and 1 assist. Looking ahead to the 2020 season, Cold Spring is bringing back 5 future division one players in Caden Hawkinson, Alex Moynihan, Brady Strough, Richie Striano, and Andrew Degennaro. The Seahawks will be thinking about this loss during the offseason as next year they will try to get back to the LIC and win it this time.