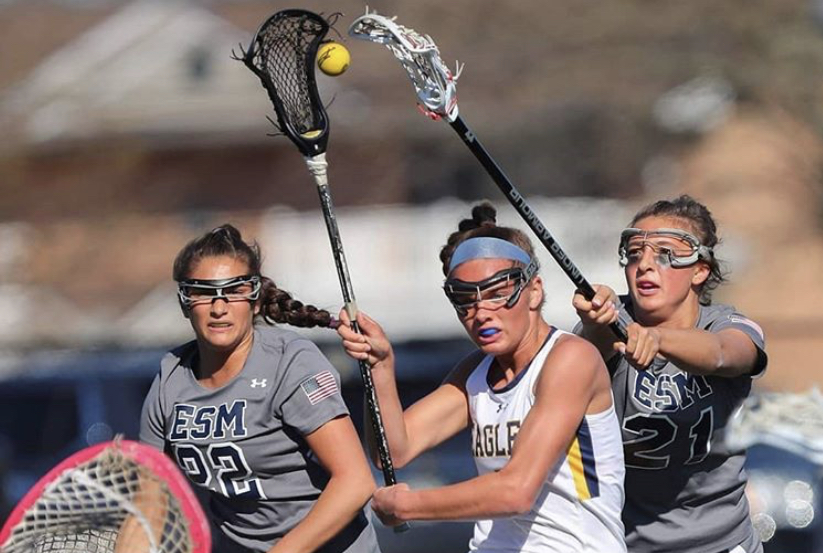 The Eagles soared into the third String King Game of the Week. Senior leader, Kayla Downey, got the girls going after scoring the first two goals of the game. Her first came on a low to high stinger that went bar down. Her second goal came on a free position as well. This time, Kayla bounced one through Vahle’s legs.

More than halfway through the first half, the Eagles held onto a 2-0 lead. It wasn’t until Olivia Arntsen took her girl below goal line extended, executed a beautiful face-dodge, attacked the top of the crease, dunking one over the head of Lanzotti. With less than eight minutes in the first half, Casey Choma was still without a point. On the surface, it seemed West Babylon had her contained. However, Choma spent the majority of the first half letting her teammates take the reigns, as she watched the opposing defense move, slide, rotate, and most importantly, try and lock her off. One of the most special traits within Choma is her ability to analyze, dissect, and know exactly when to attack.

With about 7:30 remaining in the first half, Choma found an opening in the middle of the eight. She executed a perfectly timed cut, received a feed, and quick sticked the ball into the back of the net. From that point forward, Choma worked her plan. The Sharks would score their third goal of the day on a tough dodge and dunk by Ellie Masera. West Babylon quickly responded as Emily Heller scored on a strong righty ally dodge, finishing a hard shot to the far pipe. With the scored tied at 3 and less than 3 on the clock, Choma stepped up.

Casey’s next goal came thanks to a loose ball secured by ESM after Masera rung one off the pipe. With ESM up a goal and less than two minutes remaining in the half, Choma displayed her greatness in the open field. Sprinting from the midline, Choma had her stick in one hand, fully extended, calling for the rock. Her teammate through a nice lead pass that proved to be a little high. Choma leaped into the air in full stride, snagged the ball, brought the stick to her ear, and finished what was an SCTop10 goal. Going into half, the Sharks now had a two goal cushion.

The second half moved quickly. With limited scoring and tough team defense, earning a goal would not come easy. That being said, Emily Heller was the first to respond after a pretty lefty goal early into the second. Soon after, the Eagles found Lacey Downey on a slip play for a goal. With the game tied at the fifteen minute mark, the remainder of the game would be all about three keys: team defense, winning the possession battle, and making one extra big moment play. For ESM, they ended-up winning in all three of those categories.

To start, ESM locked it down on defense. Cat Flaherty played a huge role in commanding the defense and slowing down the three headed monster of Emily Heller, Hannah Heller, and Kayla Downey. Also, super soph Katie Vahle made some big time saves to keep her team in the game down the stretch. Second, ESM’s GOAT, Casey Choma, rose to the occasion. With less than ten minutes remaining on the clock, ESM was controlling the ball on their offensive half. Choma was being locked off outside the twelve on the ball side of the field. Casey executed a V-cut while standing adjacent to the ball in order to get open, Hannah Heller did a great job staying with Casey. However, as soon as Casey finished her V cut towards the sideline, she immediately cut back door behind Heller towards the goal. Calling for the ball, Choma caught a beautiful feed on the run, and ripped a shot high for the game winning goal. The process of Choma getting the ball was just as incredible as the goal itself. Lastly, ESM won the possession battle, especially late in the game. For the last four minutes, the Sharks successfully kept the rock away from the very speedy, athletic, and cohesive West Babylon defense. Talking to Choma after the game, she gave credit to the six girls around her and the fact that her team plays with “a purpose.” Casey’s purposeful mentality comes from her teammate Jamie Biskup, who tragically tore her ACL earlier this season.

Now 9-0 on the season, ESM’s one goal victory over West Babylon is the closest game of the year by far. Before today, Bayport was the only team to come within 6 goals of the Sharks. Today’s match-up could be an appetizer for what’s to come in the Suffolk Class B County Championship!