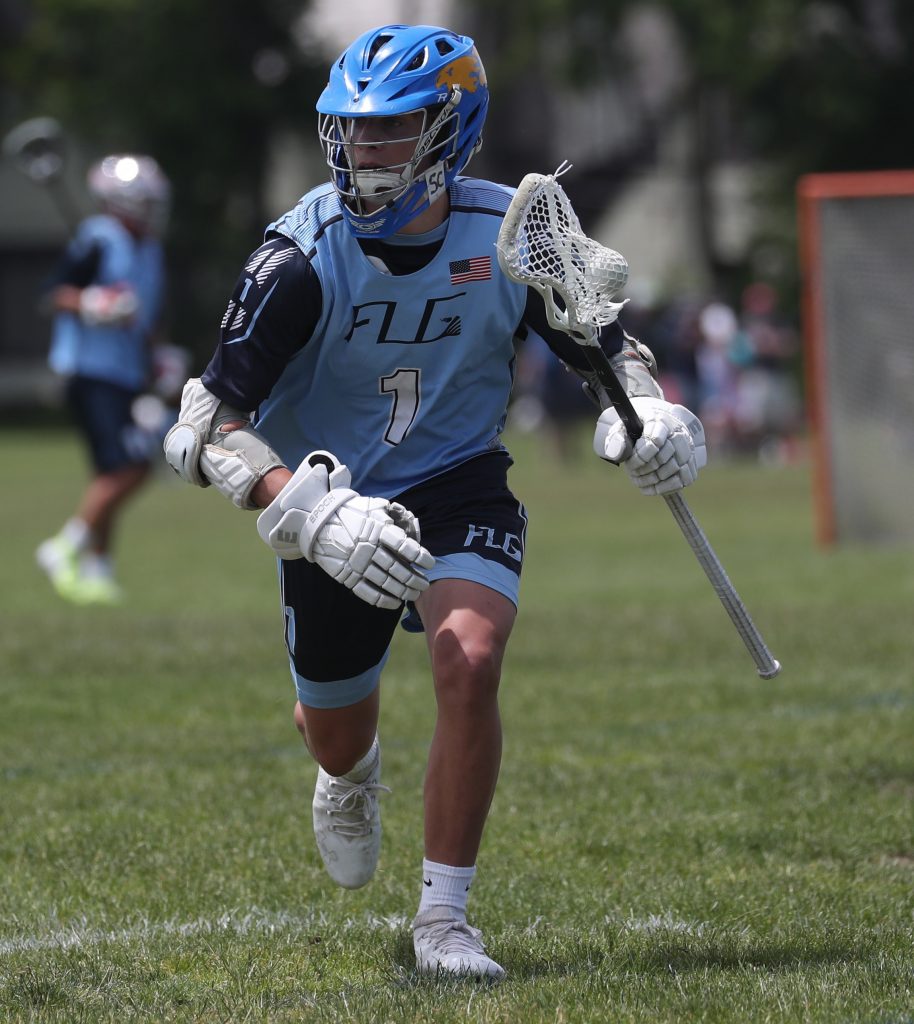 Jack Cornell (D/LSM, Island Trees)– Cornell is as fundamental as they come. A methodical thinker, he understands individual principles as well as team concepts very well. His on ball approaches are renowned, and is never afraid to D up the biggest and baddest attacker’s. Cornell has great size and smarts. You want him on the Man Down Unit.

Cristian Lembo (D, Farmingdale)- A Bull in a china shop, Lembo is not afraid to throw his body around. Great size and exceptional feet, he can lay wood while still maintaining positioning. Communicates and can support his teammates in the rotation. Great attitude and is very coachable

Lorenzo Ramos (D/LSM, Farmingdale)– Athlete! Aggressive and relentless all over the field. Ramos is versatile as he can play both LSM and Close. His altheticism and stregth plays to his favor very well, and he has a deep understanding of devensive scheme and principles. Ramos is an animal in between the lines and around the goaline.

Brandon Tello (D/LSM, Carey)– Tough! Supports his teammates very well. Tello is not afraid to pick up the loose ball and GO. A solid defender all- around. Always brings a smile to the sideline and is always ready when his name is called. Solid feet and good size, he can pretty much do it all.

Jack Nolan (D/LSM, Floral Park)– A Fire Bug! Nolan has quick feet and outstanding body positioning when approaching the ball. He is not afraid to throw the kitchen sick, wreak havoc in between the boxline and midline and just simply challenge his match-up. A true LSM, Nolan is a vacuum off the carpet and can definitely push in transition. Undstands the cat and mouse subbing game and always responds to coaching.

Alex Giacobbe (A, Manhasset)– A solid lefty that can get to his strength whether it’s off a pick or an X dodge/ invert. Giacobbe has the ability to turn the corner with his mastered jump shot. Not afraid to get down and dirty to pick up the loose ball for his team. A team player that understands the attack rotation

Ben Ferrara (FOGO, Locust Valley)– Non- stop motor, Ferrara grinds at the face off X and is never afraid to stay in and play on both sides of the ball. Early offense is option with this Gigi as he has exceptional stick skills and can stick it on the run. Understands the subbing game and is always willing to do what is asked if him. Great athlete, he has speed and strength.

Brian Connelly (M/A, MacArthur)–  Savage! Connelly is a true grinder. Whether it’s the wing of a face- off, playing solid 1 v 1 SS defense, or team offense, BC can do it all. Arguably the toughest guy on the field. Never afraid to sell for his teammates, take risks and make the hustle play. A two way midfielders Connelly can dodge, shoot and play great defense. No need to slide to this kid.

Cole Dexter (GK, Wantagh)– Confident! Cole’s great attitude and unique personality plays to his favor. Extremely flexible, Dexter is not afraid to throw his body around to make the save. Communicates well and is an exceptional stopper. Has a great stick and is definitely a threat in the clearing game, leading to transition advantages as his legs transform him into another short stick.

Daniel McLoughlin (D/LSM, Farmingdale)– Great athlete with a high motor. Top end speed with a knack for getting to the ball. Big upside for this kid!

Ian Votta (A, Division)– A decision maker, Votta is always looking to make the right play. Whether he’s stinging one up the hash, or feeding someone on the backside, it’s always the right look. Quarterback on the Man Up unit, you want the ball in this kids stick. One of the toughest guys out on the field, he’s not afraid to get down and dirty for a GB, and gain possession for his team. A true X attackman, he has great COD on the dodge, can create for himself or work off of his teammates to make the right look.

Michael Hardiman (A, Chaminade)– Fast! Has confidence off the wing. Possesses great understanding of selling the weak hand to get back to his strength. Not afraid to rip it on the run outside of 8. Works well with his teammates in the offensive rotation. Can ride and advance the ball in unsettled situations. Always brings a smile to the bench and always plays hard.

Owen Beran (A/M, SWR)– Versatile as he can play midfield and attack. Heart of a lion! Beran prides himself on the hustle play. Rides hard, finishes the ball infront, plays solid on ball defense, scoops up the GB and can be a threat as a dodger. Tough, Beran engine never turns off. Extremely coachable and not to mention, EXTREMELY intelligent.

Ronan Sanchez (A, Floral Park)– Big body righty attackman. Has a great understanding of selling the top side and getting underneath for the S dodge. Not afraid to pressure the ball on the ride, look to scoop the GB and push in transition. Can create for himself off the dodge and has range when shooting the ball. Has exceptional vision and can sting it up the hash.

Sean Miller (M/FOGO, SWR)-Miller is an absolute warrior.  Gives 110% every time he steps on the field. Sells out for his teammates. A role player, he understands his job and gets it done. A former attackman, Miller is scrappy at the faceoff X, can win it to himself or his teammates and can push in transition. Understands the cat and mouse game when subbing. Possesses the grinder mentality, Sean prides himself on staying in the defensive zone and playing hardnose SS defense.

Thomas Decker (M, Farmingdale)– Big frame and uses it to his advantage as both a dodger and BIG Righty Shooter. Decker always finds a way to get to his strength on the dodge however is never afraid to use his left. A down hill dodger, he can mustle his way to get to good spots and make decisions. Considered a two way guy, Decker has an absolute CANNON from the outside with his step down, a range extending upwards to 15

Will Spher (M, Cold Spring Harbor)-Tall and lanky, Spher uses his size to his advantage. Crafty on the dodge, he can attack from both the wings or high middle, down hill or CODs. Possesses the ability to can it low on the run and time and room, Spher is versatile in the offensive zone. Tough kid, he’s not afraid to do the dirty work, play defense and push in transition. Great attitude and extremely coachable.

Winston McLymont (LSM, Cold Spring Harbor)– Very good feet and positioning. Strategic player who understands how to keep guys in front and protect the most dangerous areas on the field.

Eli Fastman (M/A, Roslyn)-  Hard-noised player who is versatile. Eli can play multiple positions because of his skill and athleticism. Down hill player who can dish or finish when needed.

Brian Russell (A, Kellenberg)– Great hands, Russ has a background in the box game. Extremely slick, he likes to operate within 8 yards of the goal. Possesses the ability to sting it from the low lefty wing and well as finish the ball in tight situations. Can produce for himself on short snapper dodges. Relentless on ride, Russ likes to create an unsettled situation and try to make a play.

Joey Pastier (M/A, Plainview)– Signature two way style player, Pastier can do it all. The type of guy that you throw out on the wing of a faceoff and he stays and plays whatever way the possession goes. Plays solid on ball individual defense. Has speed and can push in transition. Very comfortable dodging from the high middle spot and sweeping across the top. Can stick it either on the run or time and room.

Griffin Chernoff (A, Kellenberg)-Big body lefty Chernoff dodges with force, using his frame to his advantage. Works well from the low wing either iso’d or on the pick down. Gets to his strength by bull dodging, sweeping towards the high wing and crossing the formation. Can rip it on the run and has exceptional vision. Aggressive on all areas on the field, rides hard and can scoop up the loose ball.

Luke Dellicicchi (A, Locust Valley)–  Mikey Powell quickness, with a change of direction that can break ankles. Best at X, tripping up defenders and turning the corner quickly and with fluidity. Very lethal 1v1 player and can find open men after drawing slides, which happens consistently.

Ben Bruno (M, Cold Spring Harbor)– A true grinder, Bruno is one of the toughest guys out there. Relentless, loves to play fast and push in transition. Never afraid to get after it in the defensive zone, as he uses his solid build to jam hips and play fundamental defense. A good down hill dodger, can bury it low on the run. Has a background in facing off, Bruno made the transition to the wing and always gets his knuckles grassy for the GB.

Ward Tucker (GK, Harborfields)– Nimble, Tucker is solid all around. Possesses good communication skills and has quick hands when facing shots. Can get low on the offstick shots and is exceptional against intight shooters. Is extremely comfortable when clearing the ball and is a good commander, getting the ball up and out. Very coachable and always brings a smile to the sideline when supporting his teammates.