The Spirit of the Stick. 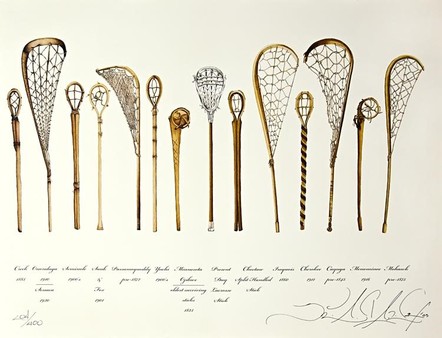 Lacrosse is the oldest sport in America. The game originated in the 1100s when the Mohawk Tribe started the medicine game across the lands by Lake Ontario . The game started as a form of entertainment, it resembled a battle. There could have been  hundreds of men on either team throwing the ball through the air. The wooden sticks hardly resemble what we see in today’s game. The sticks were constructed from wood found from hickory trees. One large piece of wood would be cut and carved to form the entirety of the stick. The stick was then strung together with animal products and leather. This construction was the norm for centuries.

The biggest evolution came in the 1860s when Dr. George Beers created rules and standardized the sport. Beers wanted to make the game the national game of Canada. Even as lacrosse grew and regained prominence throughout North America, there was not as much progress made in regards to the lacrosse stick.

The first major innovation to the stick occured in the 1970s, STX was the first to see the lacrosse stick as two parts; the head and the shaft. STX kept the shafts wooden, but they created the heads separately. STX, is a subsidiary of

Wm. T. Burnett & Co. a large manufacturer headquartered near Baltimore. The manufacturing company had the technologies to develop triangular plastic heads for the lacrosse stick. The addition of a symmetrical plastic head meant that sticks could be used either right handed or left handed players, and sticks no longer needed to be individualized. At the end of the decade the first form of mesh netting was created. The heads could now be strung together with mesh opposed to leather. The mesh was lighter and performed better than the hand strung leather heads of old.The change permitted lacrosse to play in all forms of weather.

The next big change to the stick came to the shaft, the old method of wooden sticks was becoming burdensome for players- the sticks were heavy. In the 1980’s an aluminum shaft was created. The light weight aluminum provided players a lighter stick, one that permitted easier carrying and quicker shots. 1992, a Princeton defender name Dave Morrow advanced the sticks a step further. Morrow’s dad owned a metal tubing company and with those tools Morrow created the titanium shaft. Titanium retained the sticks light nature while providing more durability to the product.

The shaft had been constantly evolving while the head remained in the same triangular shape STX established in the early 70’s. 1995 Brine established the offset head we are accustomed to today. The new shape had a lower the pocket of the netting, lowering the stick’s gravitational center. All these advancements lead to players having a more accurate feel for the stick, and a better feel for where the ball would be going. This is the design brought us the model lacrosse players everywhere are using. As technologies are improving all aspects of the stick are gradually getting better. Today the shafts are genuinely comprised of carbon-fiber. The mesh has also seen improvements. Players have a myriad of choices when it comes their netting. Mesh comes in many forms, colors, and shapes. Needless to say, these stylistic options are more than the Mohawk Tribe had nearly 1,000 years ago.