Yesterday’s prime time matchup between Manhasset and St. Anthony’s did not disappoint. Containing top Private and Public schools, this could easily be a game of the year candidate by the time the season ends in June. An unfamiliar scenery for the Friars as they relied on some key underclassman instead of all upperclassman as usual. Manhasset, on the other hand, put forth a roster with a talented array of both upper and underclassmen. In Manhasset’s extended history, this is typically how the Indian’s like to roll. Regardless of age, the best players play. During the 1st quarter, Aidan Mulholland, an eighth grader, entered the game. He quickly received a pass in his offensive end and initiated a dodge that resulted in a broken shaft of his arm and the ball finding the back of the net.

In the early part of yesterday’s game, neither team pulled out in front as both squads were in ‘feel it out’ mode. Not until the second quarter did we see the Friars start to “pull away.” 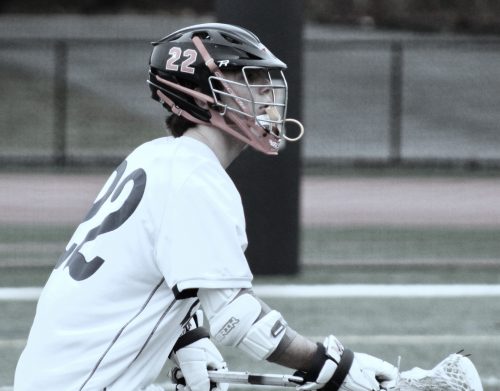 Kevin Mack scored 5 goals in the second half. His late game surge wasn’t quite enough as Manhasset fell to St. Anthony’s 14-12 in an early season thriller. #StringKingGameOfTheWeek

Led by Jonathan Huber, the soon to be St. John’s studlete this coming spring, as he netted four goals to allow the Friars to take a commanding lead.  Huber’s incredible stick skills and intelligence around the crease caused a major problem for the Indians defense. Vito Musso, the Marist Commit, helped out Huber assisting on two of his four goals. On top of that, faceoff man Brandon Rizzuto dominated at the X. Winning 10 out of 12 faceoff attempts.

Not until the third quarter did we start to see a surge from the Indians offense as senior Kevin Mack led the charge with 3 goals. Mack is definitely a player to watch this year with his talented skills and elite change of direction. Michigan may have a big time player coming their way in the upcoming year. 10-9 was the final score at the end of the third quarter, and we were due for a thriller in the 4th.

Kevin Mack continued his stellar performance as the Indians took a 12-11 lead halfway thru the 4th. It wasn’t until Bo Waters, Army commit, knocked in the game-tying and go-ahead goal to put the Friars up 13-12 with a minute left in the game. With an empty net, Vito Musso scored the final goal to give the Friars a 14-12 victory. 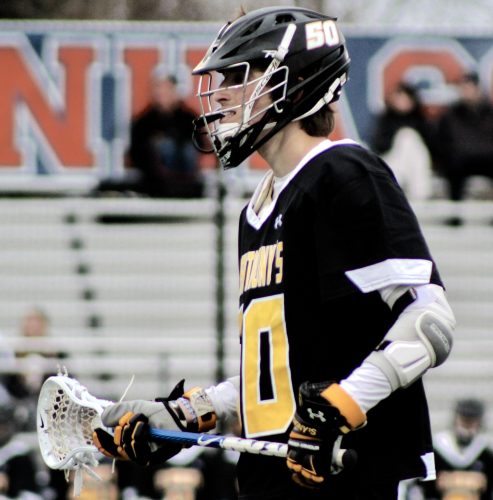 Bo Waters of St. Anthony’s had 3 goals on the day, including the game-tying and winning goals. This earned himself String King Player of the Game. #TheBestTrustStringKing

Following the game, it was clear to see that both teams had playmakers. Kevin Mack from Manhasset played lights out even though it wasn’t enough to get the win. Maybe if the Indians had their other star attackman in Jack Keough, the Hopkins Commit, the outcome may have been different. The Friars goalie and faceoff man were huge to their key win. Thomas Linger, who is committed to UMBC, had 11 saves, and Brandon Rizzuto had 23 faceoff victories. On top of that, Brennan O’Neil, the freshman phenom who is already committed to Penn State, showed us all why he deserves to be starting on one of the top programs on Long Island. As an eighth grader at Bay Shore, he led all of Suffolk County in goals. An eighth grader! Now O’Neil is prized to have a great career as a Friar and hopefully a Nittany Lion.

Manhasset looks to bounce back with a victory over the Calhoun Colts on April 5th, and St. Anthony’s will travel to Kellenberg to host private school rival on March 30th.