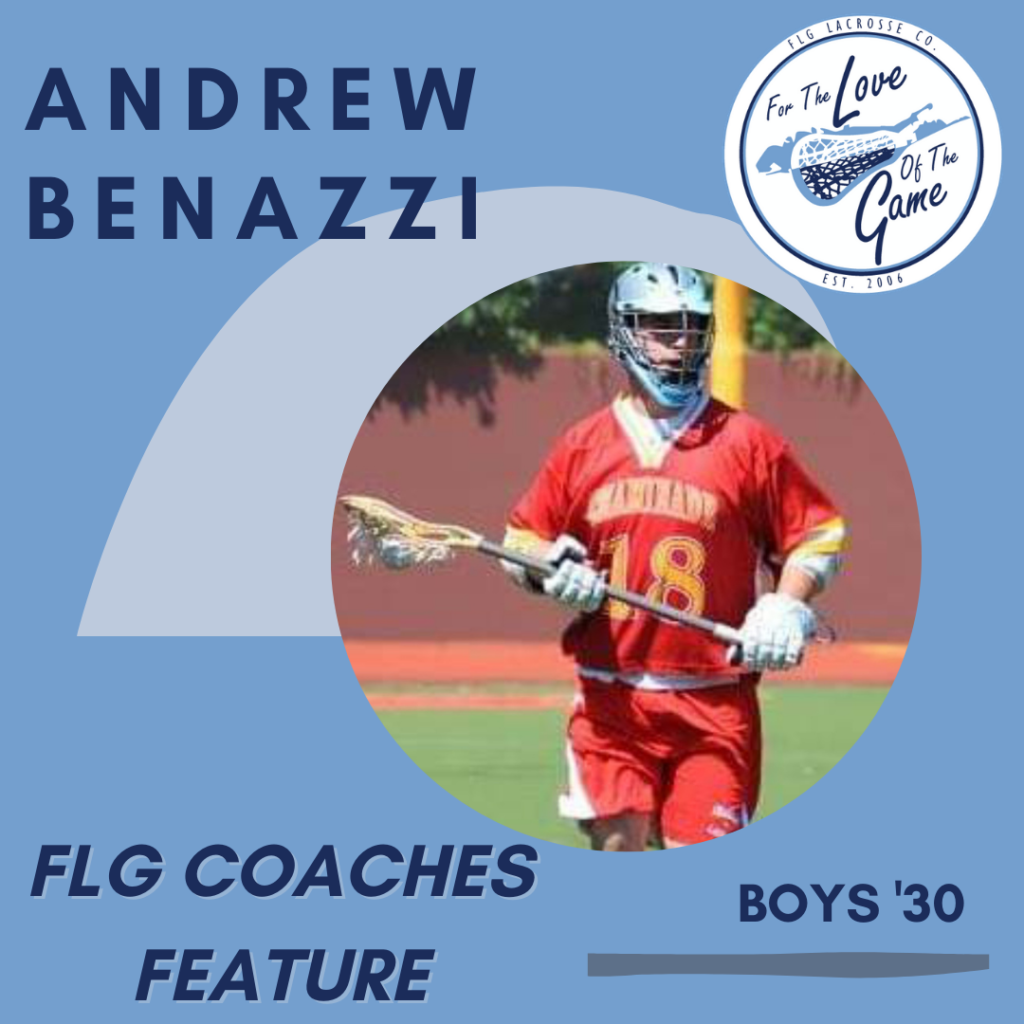 Andrew Benazzi is FLG’s acting Director of Roots and head coach of the 2030 team. The Glen Cove native is a Chaminade alum and played division I lacrosse the University of Delaware from 2000-2004. The former blue hen also spent three years as the Chaminade High School head coach after graduating from his alma mater. Benazzi also worked as a coach at the New York Lacrosse Academy in 2005. Now, the former midfielder passes on his skills and experience to the next generation of young lax players. 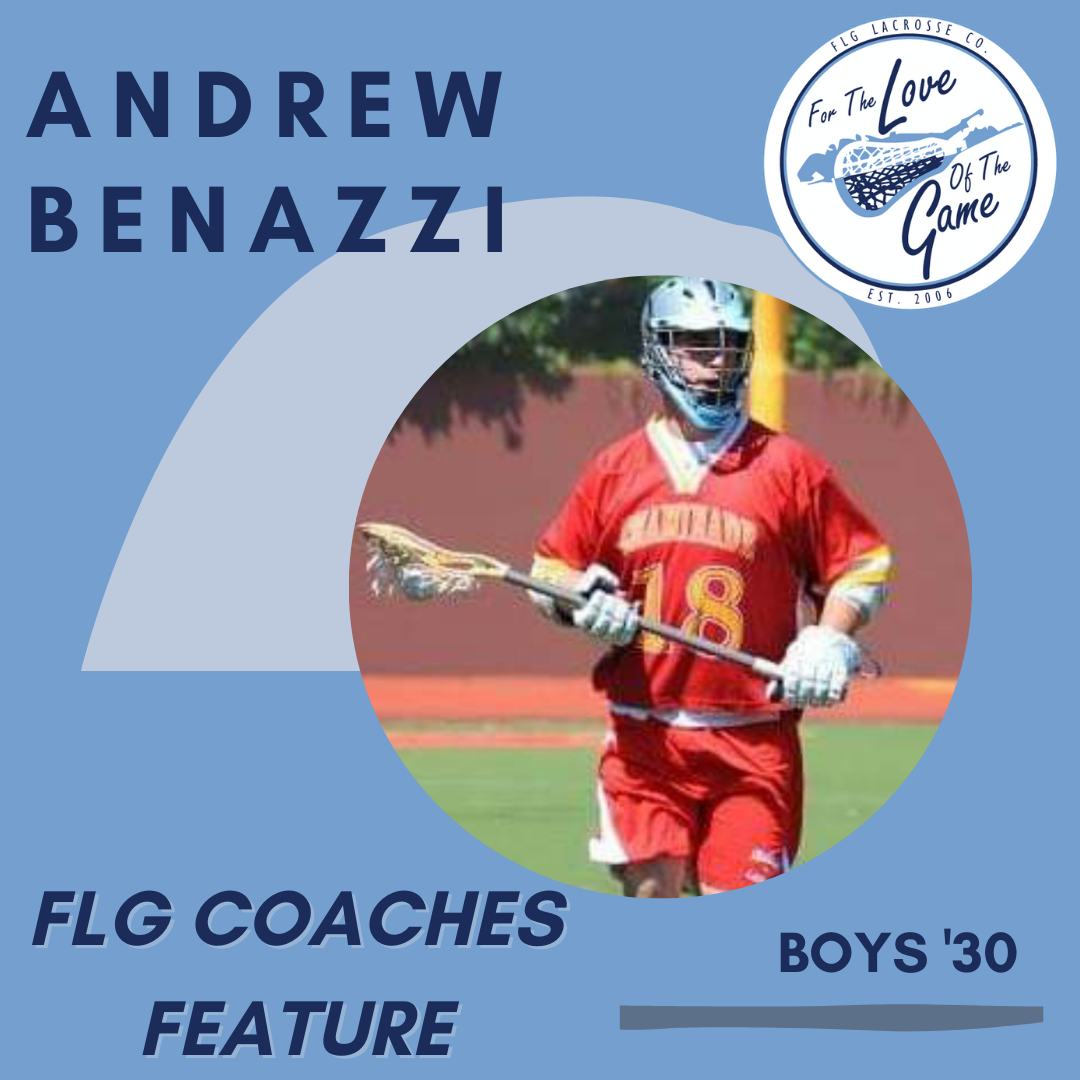 Q: What is your favorite part about coaching the next generation of lacrosse?

A: I like watching the development of talent. Taking the many things I have learned throughout the years of playing and the evolution of the game take effect with the younger guys. Watching kids really take on a similar love of the game that I have and work on their craft to strive to get better.

Q: What inspired you to begin coaching?

A: I started out as a counselor as a 14 year old at Chaminade camp. I was teaching little guys all the way up through incoming freshmen. I fell in love with having an impact on kids’ lives, not only for the athletic points, but also seeing the development as a person lacrosse can bring. Playing games or even practicing some of the drills we do allows them to develop the focus needed to be better in all facets of their lives.

Q: During your time at Delaware what was the most valuable lesson you learned about being an athlete?

A: Lacrosse-wise, I think it was the importance of conditioning. I came in as a fast kid that could run for days, but was 160 pounds. Coach told me to put on weight so I could stand up to the rigors of college lacrosse. I hit the weight room hard for the next 4 years and it really was amazing how that strength and conditioning helped my game.

Q: How does coaching the Chaminade team differ from coaching your FLG team?

A: Certainly the age of the kids is the prime difference. When working with the super young guys, the Roots levels, the level of focus and attention to detail isn’t there as much as it is as Chaminade, for obvious reasons. I take pride in teaching the little guys some of the nuance that a perennial powerhouse such as Chaminade has. Things that come innately to a high school player seem sometimes like a different language to those guys. So you teach those things with a little less explanation that you would give to an older player, while giving examples as to how it will work when they get older. As long as it’s presented in a fun way, they get it, and you hope they retain some of it going forward.

Q: What’s the best piece of advice you’ve received from either a former coach or fellow coaching staff?

A: I think the most global thing a coach has ever said, that pretty much covered sports and leaked into personal/professional life, came from Coach Pomps at Chaminade. He likened practice like building a house. He said, “build your house out of the finest bricks.” This basically meant try to do everything right, at full speed. If you get a bad brick, replace it with a better one. I’ve kind of taken that with me not only in the years of playing/coaching, but also in other aspects of my life.

Q: When you’re not playing or coaching on the field, what’s your favorite thing to do in your free time?

A: Love hanging out with my family (2 of my boys I coach), golfing, paddle tennis, and New York Islanders hockey.

Q: When pressure’s on, what does your go-to pep-talk sound like in the huddle?

A: This would be a great question for some of the kids or parents that have played for me. Usually there is some deranged eye contact with each player. Starting with a low level of volume and gradually building to some words that get the boys fired up.

A: This is a pretty tough question, because there are a lot of cool wins, goals, or assists, so I’ll try to be unique. We played UNC down in Chapel Hill. I had two goals in the game. I played what seemed like the entire game at midfield and probably my best game ever. The next game, I got named captain for Maryland at Byrd. But blew my knee out in between games at practice. I had the surgery to repair the knee which was long and arduous.

During one of the earlier stages of rehab, I grew frustrated with how slow my PT was progressing me. He’d go very low impact on me, and I wanted to get back to playing form as quickly as possible. I asked him what I had to do to speed the process up. He said build strength and be able to show him. So he started putting me on an exercise bike and would time me at max stress. The computer would monitor power output and time taken to achieve a certain distance. There was a time on the bike that was the “best” for the program. So I asked him if I beat the time, would he started doing speed training drills with me. He agreed.

I proceeded to beat the record on the bike within a couple of my next visits. Then, I called him over to look at it when I did it. He says, “that record you were up against was a professional bike rider.”

I always look back on that. And I kind of take pride in the fact that I was able to work myself like that and push my limits. I was back playing in less than 4 months.

Q: Lastly, what do you look forward to most about the upcoming season?

A: I really enjoy coaching these guys. They keep me young, and look like they are having tons of fun while developing their game really well. I cannot wait to see where all their skills wind up towards the end of the year and going forward.