When FLG ‘For the Love of the Game’ Lacrosse started 10 years ago, our mission was Building More Than Just Athletes. Today, our mission remains the same. We like to say that lacrosse is what brings the families in our programs together, but it’s the intangible traits that will set the players in our program a part.

In this post, FLG would like to celebrate some of the amazing alumni from the FLG Program who have not only excelled in college on the field, but have gone above and beyond for their teams, earning the highest possible team honor – Captain.

2015: Emerged as one of the team’s top defenders…started all 15 games on defense and had a solid season…finished second on the team with 15 caused turnovers…had a career-best three forced turnovers against Fairfield…snared 24 ground balls as a sophomore…grabbed four ground balls on three occasions (Albany, Bryant and Fairfield)…committed just three penalties… a CAA Commissioner’s Academic Award winner.

2014: Became a significant contributor as the season progressed…was in the rotation on defense and played on the man-down unit…appeared in nine games…had a big game in the NCAA Tournament at Penn, securing three ground balls and forcing a turnover…finished his first year with four caused turnovers and nine ground balls.

Background: Attended St. Dominic High School in Oyster Bay, N.Y…a four-time starter and NSCHSAA All-League member…named the 2013 NSCHSAA longpole of the year…was a Newsday All-Dong Island Second Team pick…named his team’s MVP and was a two-time participant in the Champion All-American Showcase…led his team to the state Class A title as a sophomore…played both lacrosse and basketball in high school…a member of the 2011 NSCHSAA All-Academic Team. 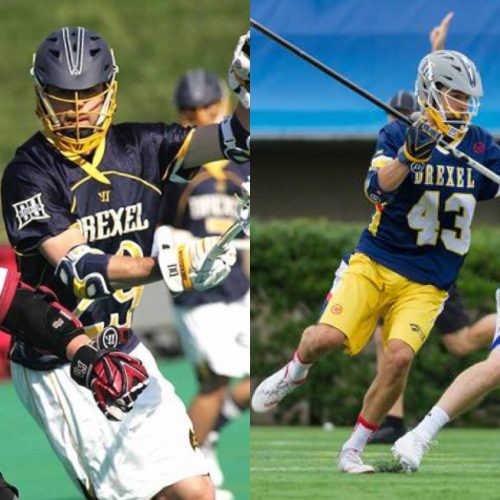 2014: Appeared in all 18 games as a freshman…part of Drexel’s rotation at long-stick…also saw time on the face-off unit on the wing…grabbed 10 ground balls and had six caused turnovers…scored a pair of goals in transition…had his first collegiate goal against Robert Morris and added another at High Point…picked up two ground balls at Villanova and at Saint Joseph’s. 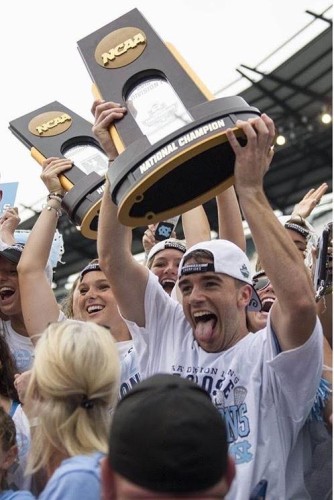 General:  Excellent freshman who will figure in the mix for playing time at the long-stick midfield position.

Personal:  Mark James Rizzo is the son of Ray and Kelly Rizzo…was born March 8, 1994 in Oceanside, N.Y. …undeclared major… his brother, Matt, played club lacrosse at the University of Michigan in 2010 when they were MCLA National Champions. 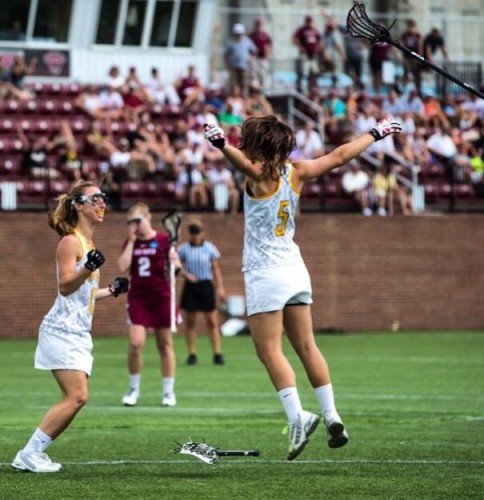 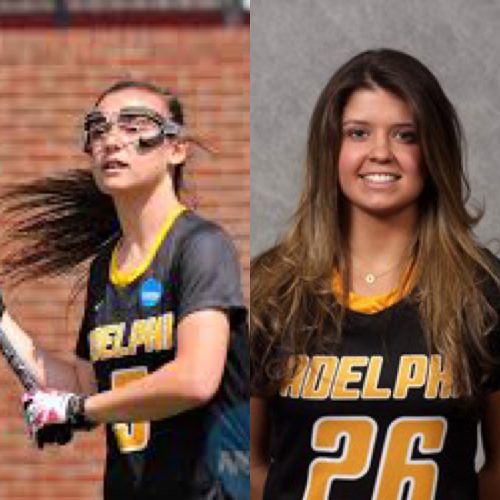 2015
• Named to NCAA All-Tournament Team.
• Finished fifth on the team in scoring with 32 points on 21 goals and 11 assists.
• All 32 points on the season have come in the last 15 games.
• Counted eight goals and five assists to his credit during JHU’s seven-game winning streak late in the season.
• Broke into the scoring column at Villanova with a one-goal, one-assist effort.
• Came back with a two-goal performance at fourth-ranked North Carolina.  Both goals came on extra-man.
• Made it three straight multi-point games with a one-goal, three-assist showing against Princeton. Multi-point run came to an end against Navy, but did have an assist against the Midshipmen.
• Fired home two goals in a 13-10 loss at top-ranked Syracuse and added one against Virginia and Rutgers.
• Notched one goal and one assist at Ohio State to run scoring streak to eight games.
• Had his eight-game point-scoring streak snapped against Penn State, but responded with a two-goal, one-assist effort against Michigan and a one-goal, two-assist showing at third-ranked Maryland.
• Scored twice in a 13-6 win over Ohio State in the Big Ten Championship game and added two goals and one assist in the 19-7 win at Virginia in the first round of the NCAA Tournament.
• Scored once and added an assist in a 16-15 win over Syracuse in the NCAA Quarterfinals.
• Finished season with a career-high-tying four-goal effort against Maryland in the NCAA Semifinals. 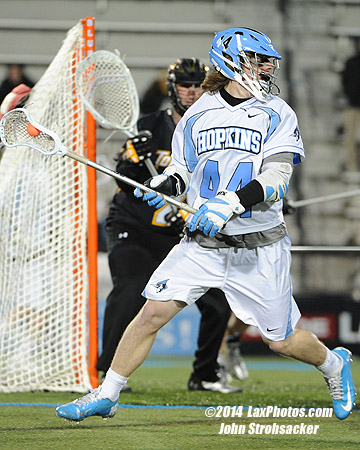 2014
• Talented freshman midfielder who has earned a spot among Hopkins’ top six midfielders. Finished sixth on the team in goals (12) and seventh in points (18).
• Had a two-goal effort in the 11-6 win against third-ranked Maryland and a one-goal, two-assist showing at Mount St. Mary’s.
• Had at least one point in nine of last 11 games.
• Enjoyed breakout game against Towson with four goals on just five shots. First freshman midfielder at Johns Hopkins to score four goals in a game since Paul Rabil had four in a 12-11 overtime victory at Syracuse on March 18, 2005.
• Scored first career goal early in the third quarter against Ohio State. Goal was the third in a three-goal run for JHU that turned a 2-1 deficit into a 4-2 lead.

At Paul D. Schreiber
• Four-year letter winner in lacrosse. Helped team to the prestigious Nassau County Class A title as a senior and trips to the county semifinals as a sophomore and junior.
• Earned US Lacrosse All-America and All-Academic honors as a senior, when he was also named to Newday’s All-Long Island Team.
• Scored career-high 48 goals and added 20 assists as a senior and finished career with 110 goals and 96 assists.

Personal
John Crawley • The son of John and Lisa Crawley • Majoring in economics. 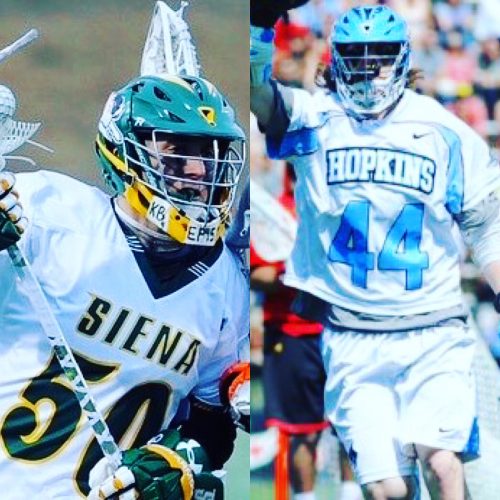 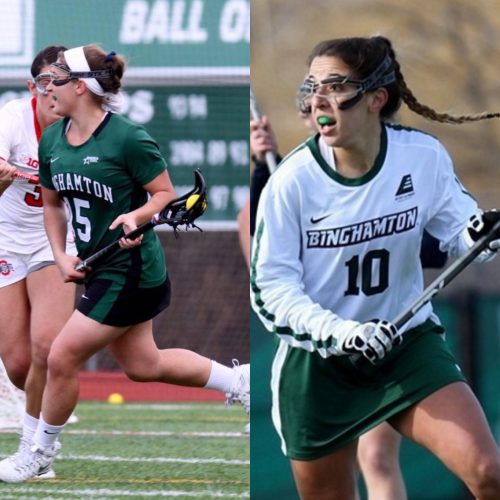 At Cornell
Matthews suffered back-to-back season-ending injuries during his two seasons at Johns Hopkins and has been granted a fifth-year eligibility waiver through the Ivy League Office.

2016: Following his first season as a starter, Matthews was named honorable mention All-Ivy. He finished the year ranked second on the team in goals (18) and fourth overall in points (21). Matthews registered at least one point in 10-of-13 games and notched the overtime game-winning goal vs. No. 11 Syracuse. Matthews had seven multi-point contests and registered a career-high four goals vs. Lehigh.

2015: Matthews saw action in six games during his junior season, seeing action vs. Syracuse, Hobart, Dartmouth, Canisius, Hofstra and Albany in the NCAA tournament. He scored one goal and picked up one ground ball vs. the Great Danes. He also had one ground ball against Canisius and Hofstra, and caused one turnover vs. the Golden Griffins. 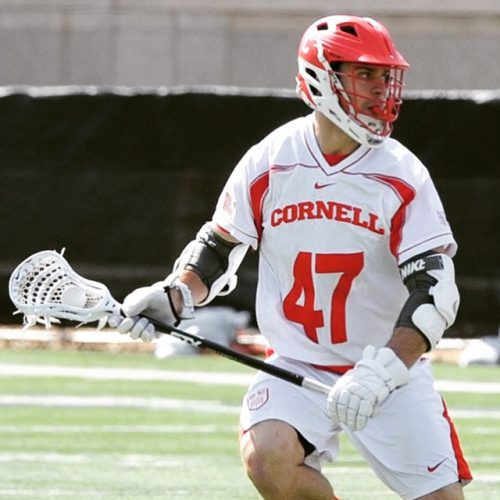 At Johns Hopkins
Matthews played in five games as a reserve faceoff specialist and member of the Blue Jay midfield in 2013, going 2-for-2 in face-offs before an injury cut his season short. He did not play during the 2014 season.

At Manhasset
Matthews lettered four times at Manhasset high school, helping the team to a 69-8 record, a pair of New York State Championships as a freshman and sophomore, as well as a county final as a junior and a semifinal as a senior. He participated in the Under Armour Underclass All-America game as a junior and earned all-county and academic all-county honors as a junior and senior. Matthews also lettered in football and basketball.

Personal
Ryan G. Matthews is the son of Greg and Amy Matthews. His father played lacrosse at Johns Hopkins from 1982-85 and helped JHU to the 1984 & 1985 NCAA Championships and four consecutive appearances in the national championship game. His uncle, Brian Matthews, and his cousin, Matt Sutherland, played lacrosse at Yale and Cornell, respectively. Matthews is enrolled in the College of Arts and Sciences.