What a beautiful day for lacrosse as we started out with a face-off win by Kevin Tiedemann of Comsewogue. The Warriors started off this game with a turnover in the box. Not much later Harborfields gave it right back. Goalie Zack Yario for Harborfields made 2 solid saves to start off the first. With 4:06 left to play, Sean Power assisted to Sean Kennedy to give the Warriors a 1-0 lead in what was a slow start to the game.  Another goal for Sean Kennedy as the Warriors take a 2-0 lead with under 30 seconds to go in the first. 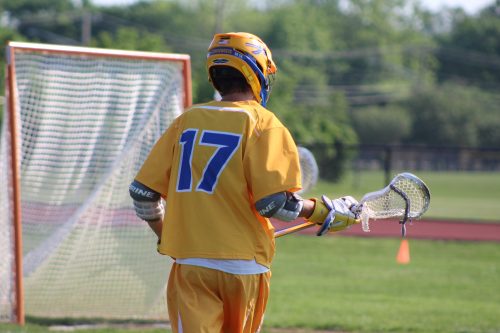 Sean Kennedy went 2 and 2 on the day, including the game winning ground ball & assist in OT. #Sutdlete Photo taken by FLG Lacrosse

Second Quarter started off with a quick response from the Tornadoes with a goal from Andrew Derasmo assisted by Pj Clementi, Warriors lead is cut to 2-1 now. Very sloppy play by both teams so far, half way into the 2nd, and both teams have over 3 turnovers each. With an odd looking goal Andrew Derasmo gets his second of the game to tie the game up 2-2, 7:34 to play in the second. Sloppy play by both teams in this game as it remained 2-2 with 2:38 to go. The second quarter ends 2-2, and with no question, the MVP of this game has got to be Harborfields Goalie Zack Yario. Yorio had 6 saves at the half. 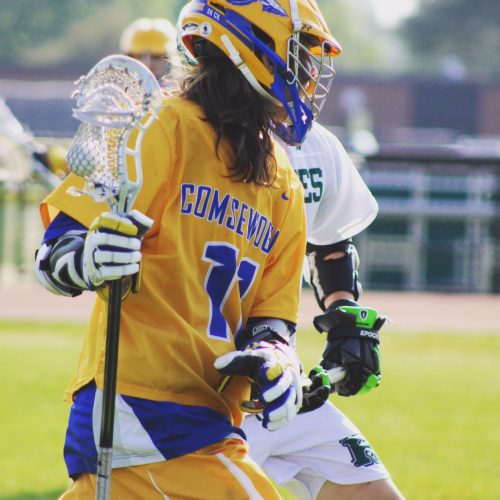 Sean Powers was great between the lines all day. Despite not showing up a ton on the stat sheet, this kid played a huge role in Comsewogue’s success yesterday. Photo taken by FLG Lacrosse

This Harborfields home crowd has been rocking the whole game and they were looking for a lead so they could make some noise. The H-fields crowd’s cheers would have to wait as Sean Kennedy gets his third point of the game as he dishes a beautiful assist to Richie Lacalandra, lead was now 3-2 Warriors. Goalie Tom Heller for the Warriors started off the 3rd Quarter with four remarkable saves to keep this a one-goal game. After a series of turnovers, Will Snelders knocks in Comsewogues 4th goal and it was assisted by Nick Donnelly. It looks like the Warriors are pulling away as Will Snelders scores his 2nd goal in a row and the Warriors now lead 5-2 with 50 seconds to go.

The Tornadoes start off the 4th with a huge goal, Andrew Loaicono scored and it was assisted by Thomas Sangiovanni. Warriors lead is now only 5-3. Here come the Tornadoes as Aiden Costello gets the 4th goal for Harborfields and the game is now 5-4 Warriors. A 2-minute stall by the Warriors resulted in a turnover that hands the ball to the Tornadoes who are now down by 1 with 6 and a half to go. Andrew Derasmo gets his hat trick as the crowd erupts. The game is now tied at 5. Tom Heller makes an incredible save with 45 seconds to go as now the Warriors have the ball with 27 seconds and are looking for the winning shot. Outstanding defense by the Tornadoes sets up an Overtime #1 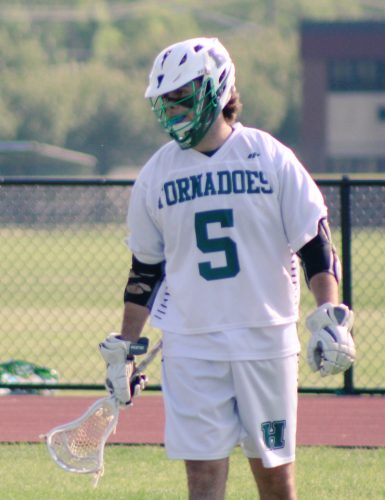 Andrew Derasmo notched 3 goals yesterday for Harborfields and was the leading scorer for his squad. Photo taken by FLG Lacrosse

The Overtime face-off was won by the Tornadoes. What a Save by Tom Kellerman, OMG. On the doorstep, Heller makes a save and keeps the Warriors season alive. Warriors ball with 3:25 to go in the first overtime. AND that’s it, Sean Kennedy finds Tj Heyder for the win, what a game. Warriors take the exciting playoff game 6-5.