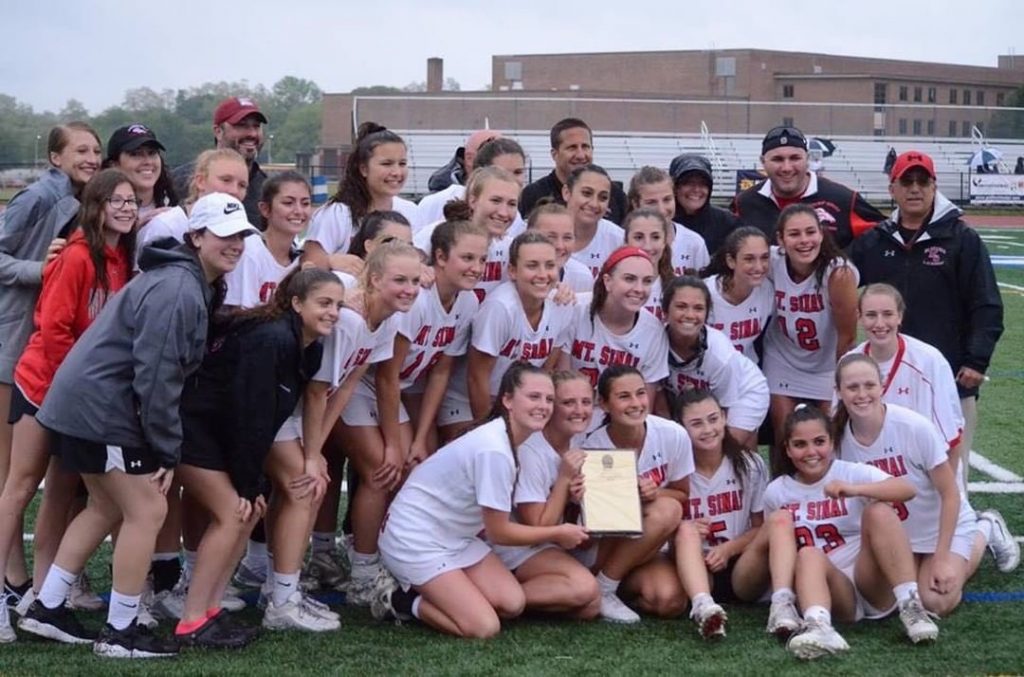 How does a perennial powerhouse rebound from a heartbreaking loss in the 2018 Long Island Championship Game?  “One game at a time”. That is how Head Coach, Al Bertolone described the approach for the 2019 Mount Sinai Girls Lacrosse team. After winning three consecutive State Championships, the Mustangs lost to, eventual State Champ, Cold Spring Harbor, last season.  With so much playoff success, it is easy to become focused only on results, and you can feel as though you have failed, unless you win the State Championship. While the Mustangs have certainly had their share of victories and Championships, to Coach Bertolone, that is not the only measure of success.  He tries to keep his program focused on the “journey”, not necessarily the destination. “Losing last year, was not a bad thing”, sometimes you “need to fail, to move forward”, Bertolone explained. And that is exactly what this year’s team is looking to do. They are “hungry” and very “motivated”, to return to the top of Class C.

Gone from last year’s County Championship Team, are Meaghan Tyrell (Syracuse) and Meaghan Scutaro (Notre Dame), but the cupboard is far from bare.  The Mustangs have two returning, two time All Americans, in Goalie Emily Lamparter (committed to Maryland) and Midfielder Jenny Markey (committed to Syracuse).  Lamparter will become the starting goalie and show Long Island lacrosse that she is one of the top stoppers. MArkey will be accompanied by Emma Tyrell (committed to Syracuse) and Morgan Mitchell (committed to Stony Brook) at the midfield. This trio can be classified as one of the top midfield units on the island. Another key returner for the Mustangs is Gabby Sartori (committed to Brown).

Mount Sinai will be strong all over the field, and does not appear to have any real weaknesses. This team has strong leadership from a group of key players. They are a close knit group that worked hard through the summer, played together in several fall tournaments and will compete in a winter league and practice on Sundays.  With so many key players returning, to a team that is dedicated to their “process”, they should have great team chemistry, and once again, be a force in Class C.

See previews for every Long Island team by purchasing the LILJ app for $2.99 on your local app store (Apple) (Google Play) (Amazon)