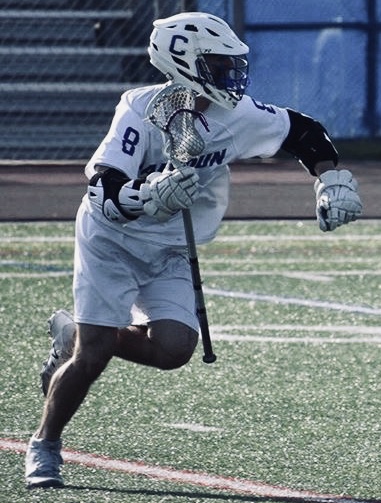 Yesterday evening, we saw a battle between two great teams. This battle ended up with Calhoun winning 8-7. This game had it all, heart, drama, and intensity.

The first quarter consisted of good ball control by both teams. Calhoun scored three times led by Nick Turrini with two goals and Hayden Pryor with one. Hewlett was also able to get on the board with a goal from junior, Jonathan Miller. Both Calhoun and Hewlett displayed great shot selection this quarter. However, both goalies were on their game making big saves. Calhoun played nearly unstoppable defense only allowing a powerful Hewlett team to score once. At the end of the first it was Calhoun three Hewlett one.

In the second quarter, Calhoun made their run. They scored three times, once by Pat Carragher, once by Ariel Dejesus and once by Nick Turrini. Hewlett scored once with Robert Levitz. Hewlett had some good possessions, but had a difficult time getting past Calhoun goalie, Kyle Munson. Also, the Calhoun defense did a great job pressuring Hewlett to keep them moving the ball around and not giving them easy shots. At the halftime it was six to two in favor of Calhoun.

In the first half, Calhoun’s goalie Kyle Munson picked up five saves against a very potent Hewlett offense. They also won six out of ten faceoffs which is a very big reason they went on their run and got the lead. On the opposite side of the field, Hewlett displayed solid defense. Standing out was their goalie Max May, making five big saves in order to keep the game close. Louis Esposito also made one save in the second quarter when he came in for May briefly.

The third quarter was an extremely exciting one. The third was dominated by Hewlett. The Bulldogs scored four times. Led by Jordan Epstein with two goals, followed by big goals from Sam Rovner and Matthew Weiss. Hewlett’s defense also stepped up a great deal only allowing Calhoun to score one goal, which came from Ariel Dejesus. Going into the fourth it is Calhoun up seven to six.

This Nassau Class B playoff game was now positioned to be one to remember. Hewlett would score once with Jonathan Miller to tie the game. Hewlett’s defense played incredibly well, holding down a high-powered Calhoun offense. With under two minutes left, eighth grader, Pat Carragher scored the game winning goal for Calhoun. Calhoun’s defense played great as well, only allowing one goal and giving their boys a chance to secure the victory.

In the second half, Max May made five saves, stopping what could have been a runaway game for Calhoun. Hewlett also got seven ground balls, four from Robert Levitz, and three from Matthew Weiss. This half, Hewlett took control of the face-offs winning four out of seven. For Calhoun, Kyle Munson continued to play his part picking up four more saves and setting up his team for the eventual victory.

After the game I got to speak with the coach of Calhoun, Jim Feminella, I asked him what this win meant to him, to which he replied, “This will be our first final four visit in nearly 20 years, so it meant a lot to win in such a big game.” I also got to speak with Pat Carragher, who hit the game winner and asked what this win meant to him, he replied, “It’s a crazy feeling. It meant a lot to our seniors so I’m glad I was able to do my part.”