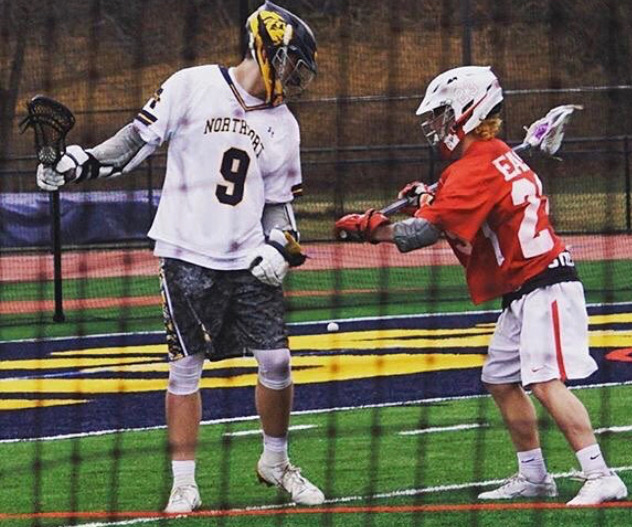 The crowd was rowdy for this battle between two tough and gritty teams and it was an old school Suffolk County class A match up. These teams played earlier in the season where Northport blew Smithtown East, 14-5, so Smithtown East was looking to redeem themselves in a win or go home situation

Declan Goonan was a monster between the pipes as he had 15 saves, most of them in the second half. Goonan faced some tough shots all day long, and he was crucial to Northport win. Northport’s next task ahead is Ward Melville, and like today, Goonan was phenomenal in that game finishing with 11 saves. If Goonan plays the way he did today against Ward Melville in their next playoff game, Northport will be in the game all day. Max Napoli and Liam Caulfield clicked together all day long and the chemistry was obviously there if you watched this game. Both of them did a great job finishing on fast breaks, Napoli and Caulfield are going to go up against one of the toughest defenses on Long Island, and they have their work laid out for them. Matt Cannon held his own on the faceoff X against one of the top FOGOs on Long Island in, Chris Arceri, but next game he’s going against another top FOGO in, Brandon Aviles. The Cannon vs. Aviles will be a key factor for this matchup. Ward Melville is going to be out for vengeance as they don’t want to lose to Northport twice in one season, especially in a playoff game.  This games is going to be a must see playoff game, and it will be a battle for 48 minutes.

Before this game, Smithtown East had the monuteum heading into this game by winning 7 straight games including a huge victory against Ward Melville. Smithtown East had a solid season under first year head coach, Rob Campbell, but the loss of Keith Ditta and James Peters is going to hurt. Looking ahead to next season, Smithtown East should be excited about Junior, Chris Arceri, Freshman, Owen Carroll, and Sophomore, Chris Goria. The Bulls are lucky to have Carroll and Goria for the next couple of years, and both of them have the potential to have good high school careers, and they will have a bigger role on this team next year.  Rob Campbell didn’t take the job until late in the offseason, so that might have effective chemistry as they struggled a little bit in the beginning in the season. Now he has more time in the offseason to get to know his players better. Smithtown East will be a team to watch out for next season.