Garden City’s Celia Concannon is a dream for Ivy League Women’s lacrosse programs. Celia will be heading to Harvard next year. Before she makes moves to Boston this Fall, she’s got her eyes set on another NYS Class B State Championship.  Photo-credit: Newsday

This year, the Lady Trojans hope to be right back where they were last year, holding up a State Championship. Even after losing three All-Americans, this year’s team still has the components to make a State Championship run.  The 2017 roster has great chemistry and feels they can play with anyone.

The worst case scenario for this year’s Trojans would not be making an appearance in the County Championship.  Not many teams in Nassau have the talent that Garden City has. So, a quick exit from the playoffs would certainly be a disappointment.

“Prove it. Prove to me, prove to your teammates, and when you get your opportunities on the field, prove it by doing right by your teammates.” -Danielle Gallagher, Head Coach, Manhasset 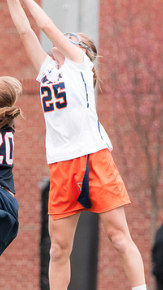 Madison Miller is a senior midfielder heading to Vanderbilt in the Fall. Miller will need to step-up this year for the Indians. She definitely has the athleticism and ability to do so. Photo-credit: 3sixtyathletics.com

Best Case Scenario: The Manhasset Indians have the ability to do a lot this year. They have very good individual players. However, this program is expecting more than great individual play. The Indians are looking for their athletes to prove they can play within a system, as well as, play within an offensive and defensive unit. Coach Gallagher keeps the door open every day in practice, giving her players an opportunity to show they can play hard, play selfless, and play for a championship caliber team. This mentality raises the level of play each day, making this group one to watch out for!

Worst Case Scenario: It would be disappointing for the Indians to sustain injuries and not fulfil the team’s goal of winning a County Championship. 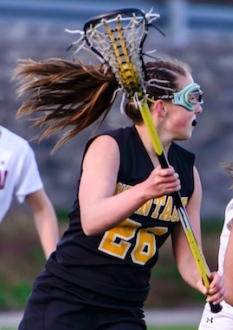 Alexandra Murphy is a stand-out athlete at Wantagh. Not only does she lead the Warriors on the lax field, but she’s an All-State soccer player as well. Can she lead this group to a County Title in 2017? Photo credit: News 12 Varsity

This year’s Warrior squad is filled with both athletes and excellent students. “We see a lot of togetherness from the girls. Good senior leadership and very impressed with their attitudes.” Said Head Coach Greg Cody, “But, I’m most impressed with their abilities in the classroom. All our top girls have a 90 average or better.” This is arguably the most dedicated group of girls that Head Coach Greg Cody has ever had.  The Warriors goal is to capture a County Championship.  Every game will be a grind this year as the conference is packed with talent, but the Warriors themselves have plenty of experience and college commits to lead the team.

Not capturing a County Championship would be disappointing for the Warriors this year.  This team is very dedicated and is striving for a Championship.  These Seniors are looking to make their last year count, but it will not be an easy road.

“Our motto this year is rise-up. We need don’t want to sweat the small stuff. We want to get up and keep moving forward all year.” -Danielle Castellane, Head Coach, Cold Spring Harbor 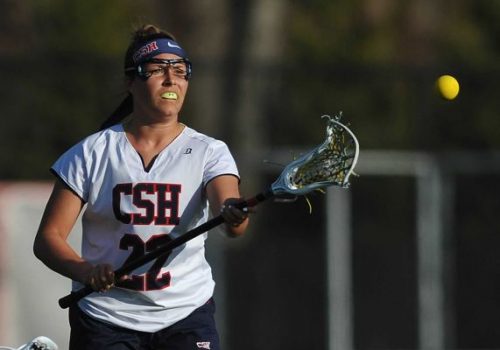 Kate Kotowski has the ability to take over a game. She’s a five-year varsity player and will be the key to the Seahawks offensive in ’17 Photo Credit: Newsday

Playing all the way into June is the main goal for this year’s Seahawks as they have their eyes set on a County Championship.  Some might think losing two All-Americans will cause problems for this year’s team. However, if you ask Coach Castellane, she’d say her team will be just fine. “Losing two All-Americans means more opportunity for players on our current team to step up. We have a lot of weapons and threats this year. They are just going to be used differently. Overall, I’d say we are a more balanced team across the board in 2017.”

The worst case scenario for this year’s team: not holding up a County Championship plaque.  This team has incredible chemistry and lots of big name commits.  With the talent they have, it’s hard to see many teams beating them this year.

“Our motto this year: Empty the Tank. It’s symbolic of giving everything you have.” -Rachel Ray, Head Coach, Long Beach 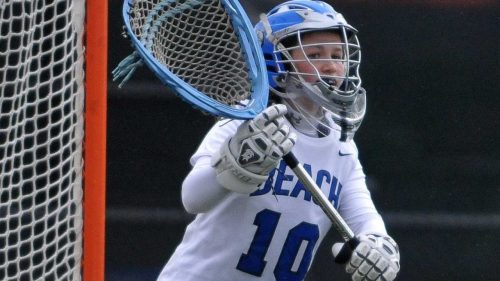 Long Beach Goalie, Sarah Reznick, has been in the cage for the Marines since 8th grade. Sarah’s thirst for knowledge of the game has allowed her to grow as a goalie each year. Watch this super-star light up the field this season. Photo Credit: Newsday

The goal for this year’s team is to get back to the semi-finals and eventually capture a County Championship.  This year’s squad is very focused and is hungry to get a chance to compete for a title.  According to coach Rachel Ray, “This is one of the most competitive teams I’ve ever been around. I don’t need to ask a lot of them, they are ready to go before the coaches even get to practice. While it’s a fun group to be around, they know exactly when to dial it in and focus.” With a deep bench and lots of athleticism, the Bulldogs are primed to play a fast-paced style all year long.

The worst scenario for this year’s Bulldogs would be a quick exit in the playoffs.  With a difficult schedule it will definitely not be an easy road, but with the talent the Bulldogs have anything is possible.

“The work ethic and leadership is everything. The girls in our program want to do well and go far. Having that mentality really helps. Our girls are really focused. We do lots of things in the off-season and get the middle school girls involved throughout the year. I try to get everyone in the program on the same page and have them use the same language.” -Meg McCormick, Head Coach, North Shore 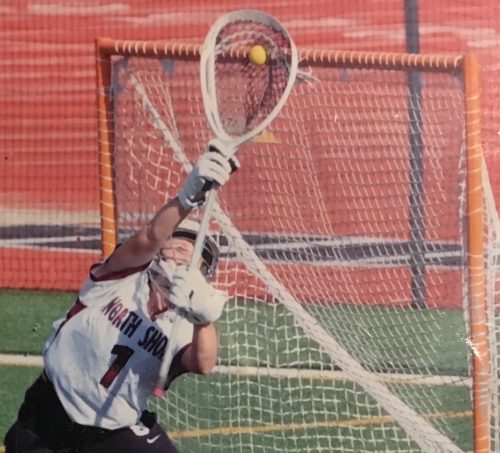 Quinn Lacy is an acrobatic stopper who not only makes saves a goalie should make, she makes ones that most goalies don’t make. Her active style of play puts her in positions to pick off passes and create havoc for an offence.

After a .500 season last year in Conference I, the Vikings are hoping to capture a County Championship this year.  This year’s squad is super close and have been training hard all offseason. The keys this year for the Vikings are to limit turnovers and maintain possessions.  By doing this for a full 50 minutes, the Vikings are confident they can compete with anyone in Nassau Conference I. This year’s team has lots of depth, especially on the defensive side of the field. If this competitive group maintains their composure come playoff time, they might find themselves holding up a County Champion trophy.

Since everyone in Conference 1 makes the playoffs, the worst thing that can happen to the Vikings this year is a quick exit from the dance.  The talent is there for this year’s Vikings. So, a trip to the Championship will be in the eyes of every girl on the team.

“I took 26 girls this year. This will be my biggest team yet. A majority of our girls have been with us since 8th or 9th grade. So, they know what to expect. I set the bar and the girls take it and raise it for themselves. They love each other and want to accomplish this goal together.” -Lauren Lomonaco, Head Coach, Syosset 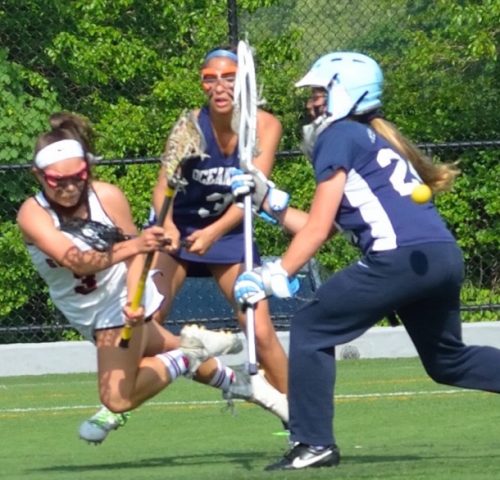 In 2016, the last game for Nicole Concannon was a big win against Cold Spring Harbor. After being sidelined for the rest of the 2016 season, it’s safe to assume Nicole is excited to get back at it in 2017.

For this year’s Braves, the goal is simple: get right back where they were two years ago, playing for a Long Island Championship.  This year’s team is led by an experienced core, who are committed to playing for Division I schools in the years to come.  Playing in one of the hardest conferences in Public High School lacrosse, it will by no means be an easy road for the Braves. With that said, winning a County Championship is not out the realm of possibility and will be the goal for this year’s team.

The bar is set high this year mainly because this team’s Senior class has been playing together since 4th grade.  The chemistry for this group is the best it’s ever been.  Not winning a County Championship would definitely be a disappointment.