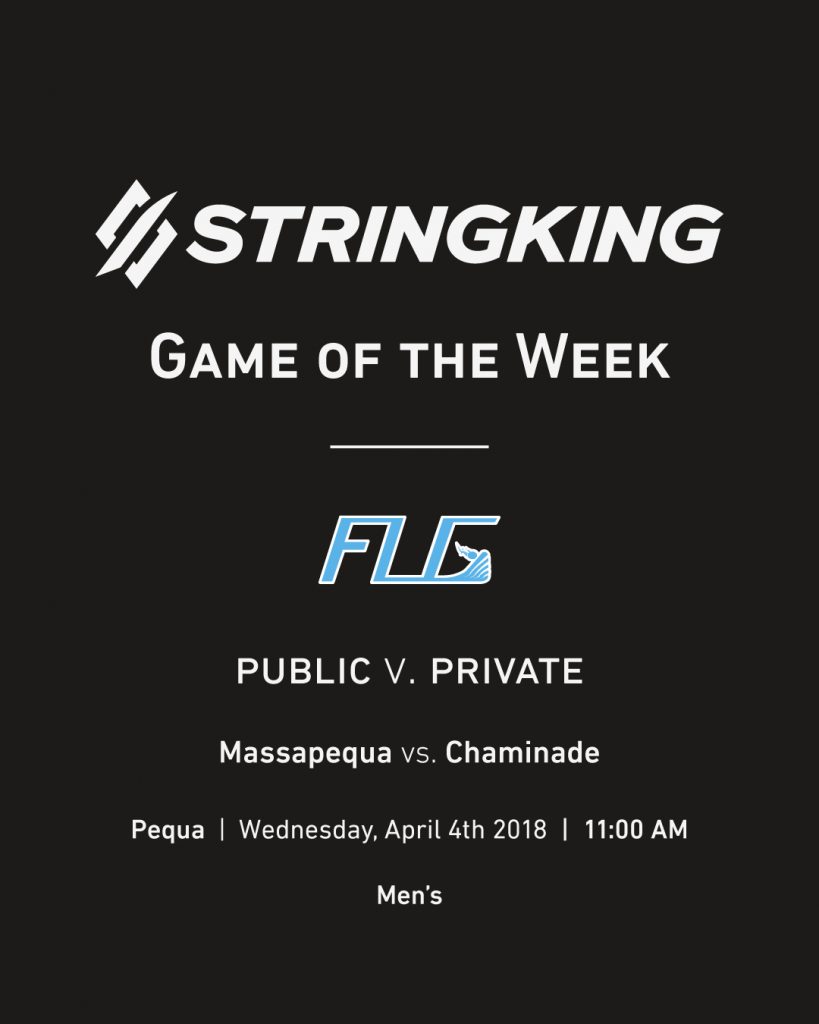 With both teams recording win streaks to start off their seasons, Massapequa will face off on their home turf against parochial powerhouse Chaminade on Wednesday April 4th. A Public vs. Private match up, these two programs are arguably the best in their league. While they both have started off their seasons on the right foot, only one victor can be named. It all goes down next week on the south shore of LI.

Massapequa was unanimously voted the top lacrosse program in Nassau County. Working hard in the offseason, the Chiefs have built a winning tradition predicated on skill and finesse. Head Coach Tim Radomski accompanied by legendary NCC Coach George Powers, have truly built a powerhouse program, year after year proving that they are at the top of the totem pole in Nassau County Class A. Working hard in offseason training, ‘Pequa returns talent on both sides of the ball. Starting on the offense, All-County attackman Timmy Ley (Boston U.), controls the pace, owning the hash and stretch shooting through defense on the left side. He is accompanied by an insane amount of talent at the midfield including key notables Garrett Gibbons (Maryland), Kevin Lynsky (Wesleyan), Sam Lufti (Hofstra) and fogo Angelo Petrakis (Cornell), all possessing the ability to come up with big plays all over the field. On the defensive end, The Chiefs are loaded, defending the knowns and protecting the house. In the cage, All- County goaltender Mike Venezia (Lehigh) is surrounded by defensemen All- County Griff Hawthorne (Notre Dame), Brian Leneghan (Bowdoin) and Kenny Brower (Duke).

For 39 seasons, Head Coach Jack Moran, has built one of the most competitive lacrosse programs in the country. Built on three pillars “God, Family and Teammates,” Chaminade brings energy and effort like no other when they play. Settling for nothing less than excellence, the Flyers walk into every game with the same mojo, playing to the best of their ability. For the 2018 season, Chaminade is stacked on the offense end. At the midfield, seniors Sean Kuttin (Yale), Will Kusnierek (Princeton) and Chris Nicholas (UNC) all know their roles and get their jobs done. At attack, Aidan Byrnes (Army) and Pat Kavanagh (Notre Dame) are dynamic, controlling the ball, translating their skill into points on the scoreboard. Piloting the defense, the Flyers are led by Andrew Bonafede (Duke) in the cage and Frank Marinello (Duke) and Anthony Trangredi (Lehigh) at defense on the low bases. Chaminade prides themselves on playing and extremely strong schedule. They are motivated to rise to the challenge and fly over their opponents.

Based on my analysis, and key returners of both squads for the 2018 season, I believe that Chaminade will come out on top of this game. The Flyers, are Boeing 747 powerful on the offensive end, maybe a little too much to handle for the Chiefs. I believe that Massapequa will have the edge with Petrakis at the face-off X, which will definitely be a factor in order to keep them in the game however Chaminade will get to 10 and take home the victory.