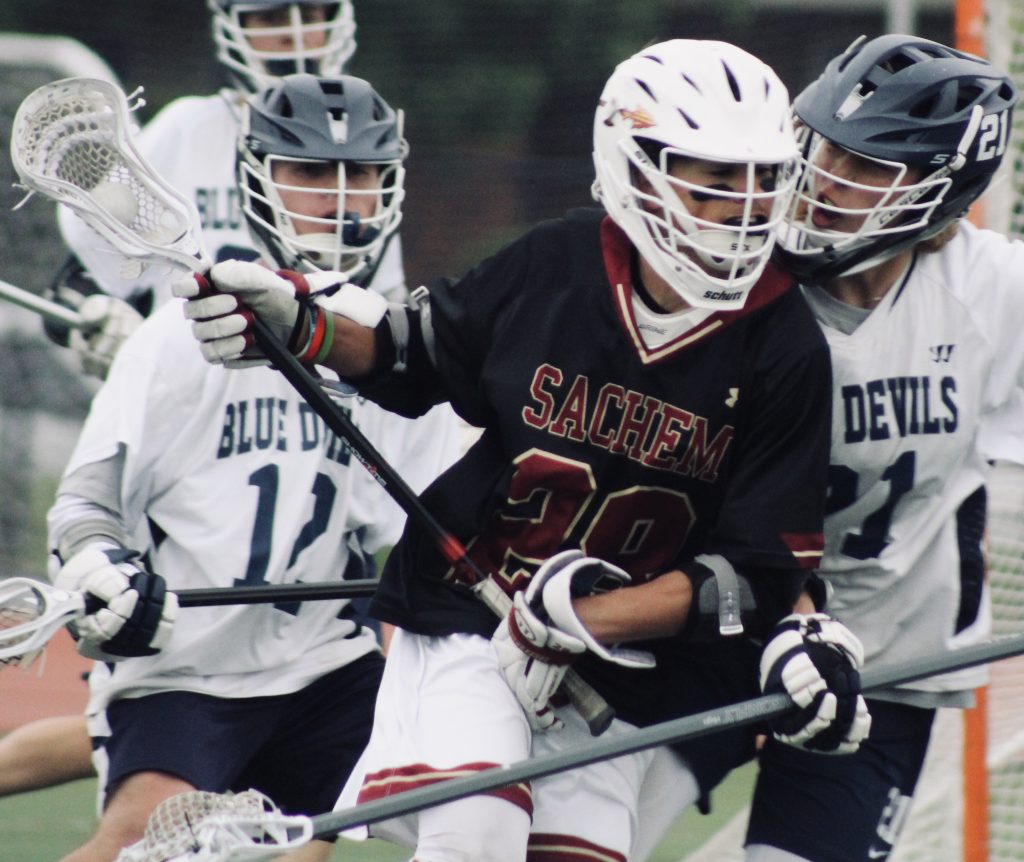 The first half was dominated by Sachem East. Led by goaltender Tim Livingston, the East defense was shutting down Huntington’s athletic offense. Livingston was swallowing up shots comings from all directions and distances. Rafael Rodriguez really got Sachem’s offense going early in this game. He was involved in each of Sachem’s first half goals. Going into the first half, Sachem was up 5-1.

The third quarter was again dominated by Sachem East. Rodriguez kept the party going by contributing on the offensive end. One of Rodriguez’s biggest plays came late in the 2nd quarter. He made a great move to his left hand after dodging from X, fed sophomore Jack Murphy who stepped down from 11 yards for a textbook high to high shot for a goal. With the score now 6-2, Rodriguez wasn’t done. After an excellent pick by sophomore, Luke Mangan, Rodriguez drove from X and stuck a shot on the run, making the score now 7-2 at the end of three.

The fourth quarter was an entering different game in itself. After Sachem escalated their lead to 9-2, everyone but Huntington thought the game was over. Sparked by stellar face-off play from freshman, Robbie Smith, and goals from Torin Bograd, Billy Burton, and three huge goals by Jordan McCoy. After making it a 9-7 game, Robbie Smith won the ensuring face-off, but Huntington had an unforced TO. After losing that possession, Sachem was able to maintain possession, draw a flag, go man-up, and win a huge first round playoff game against Huntington.

While Huntington didn’t end this game the way they wanted, they should be proud of how they performed this season. This team has a really nice core of underclassmen returning next year. Their best years might be ahead of them. Shout out to the nine Seniors on Huntington who contributed to a successful season for the Blue Devils. Especially to Jordan McCoy, who ended with some memorable moments in the final game of his High School career.

String King Player’s of the Game were Rafael Rodriguez and Tim Livingston. Rodriguez had two goals and four assists on the day and Livingston tallied 11 saves on the day. Tim secured a first team spot on our All-Beard Team presented by Man Van Dog and Rodriguez was recognized as one of the swaggiest players in Suffolk.

Sachem takes on Smithtown West this Friday at West HS.